One of the contributors to The Compleat Witch Bibliography Project, Kevin I. Slaughter, has released a facsimile edition of the first two books listed in that very bibliography… and includes a third rare title as well!

This book contains facsimile reprints of the rare booklets “Sketches of Naughty Ladies”, “Confessions of a Taxi Dancer” and “Chorus Queens, or, The Private Lives of the Hotcha Chorus Girls”.

Enter the world of Johnson Smith & Company, or at least some of the more risque parts of it. In the beginning of the 20th century a family could have two catalogs to survive. One was the Sears-Roebucks catalog, and from it you could buy everything from horse bridles to clothing and kitchen utensils. In fact, just about everything you absolutely needed to live you could buy right from the pages. And then there was everything you didn’t need, but really wanted-and that’s where Johnson Smith & Co. came in. From whoopie cushions to pistols, this thick catalog was truly the “Necronomicon” to Sear’s “Holy Bible”. 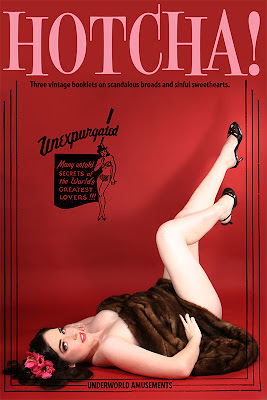 Established in 1914, they produced all sorts of novelties, many of them quite cruel. If it didn’t cause physical harm, it would send you home shamed. When WWII broke out, they quickly cranked out 1.5″ novelty buttons that said “To Hell with Japan”, “To Hell With Hitler”, and even the phonetic “Moider Dem Japs”. Johnson Smith was for the people.

A wave of conservatism washed over the country, reacting to those care-free previous decades. Gritty pulp novels and Tijuana Bibles fed the street level need for sex and violence, but it wouldn’t be another decade before the word “pinup” was coined. In the JS & Co. product lines they had a number of publications of varying interests and quality. Offering full books to nickel or ten-cent booklets. From money making idea guides to Minstrel Show routines, exposés of the Masons and the Klan, Black Magic and dreaded White Slavery. Because JS & Co. was aiming for the mass audience, they knew what most people LOVED: the lowest common denominator. That meant skirting as close to the issue of sex as possible in the open market.

Hear the shocking confessions of those “dime-a-dance” girls. From the frisky patrons to the expense of keeping up-to-date with your coiffure and gown. A glimpse of a past-time long past. 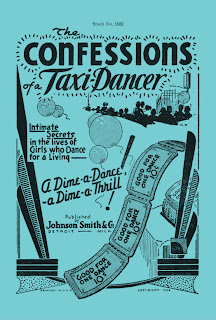 The “taxi dancer” was a term that came about in the late 20’s. Taxis were the closest you got to legal sex-work, and quite a few of the girls performed the illicit pay-for-play services as well. They were professional dance partners, and like a taxi cab, you paid for time spent. In many ways, these girls had it better than strippers do today, they made two to three times what a factory or retail girl would, but never had to take their clothes off.

In many ways they were replacement prostitutes.

Dance halls were BIG in the 20’s and 30’s. In 1931 there were over 100 taxi-dance halls in New York City alone. “Ten Cents a Dance” was a hit song and 1927 saw the Joan Crawford film The Taxi Dancer. 1935 saw the release of a great marathon dance themes crime novel They Shoot Horses, Don’t They, by Horace McCoy.

Unique to American culture, the taxi dancer served as a sort of legitimate prostitute. Sociologist Paul G. Cressy studied them starting in 1925 and released his findings in a 300 page paper entitled The Taxi-Dance Hall : A Sociological Study in Commercialized Recreation and City Life. He classified nine basic categories of male patrons in the following manner:

These categories seem remarkably similar to those you find frequenting whore houses. Because there was no legal barrier to the taxi-dance, it became an enormously popular and profitable venture.

This book reveals many of the intimate secrets and fascinating pastimes in the lives of the famous Broadway hotcha girls. The book contains 11 thrilling chapters, more than you would get in some books two or three times the size. Although there has been a lot of talk and discussion about chorus girls, few people seem to know exactly what they do. Now, for the first time a famous author takes you behind the scenes and give you an intimate glimpse into the secrets back stage. 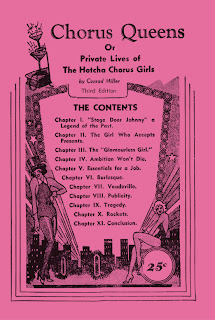 Ahh, those beautiful dancing girls! They’ve delighted billions, more grins have been served in the dimly lit turn of the last century burlyque houses to the modern strip club than all the burgers served by McDonald’s.

The laws have wavered over the many decades, loosening and tightening with the prevailing mores. More loosening than tightening, the shows have slowly crept into an eventual state that the Christers feared. In 1904 the girls were arrested for not wearing tights, today, in many cities, there is not a single article of clothing you need to remember lest you get thrown in the pokey.

The girls described in Chorus Queens were at the mid-point of this evolution, but more immediately they were in a dreadful downturn. The moralists had waged a war that was coming to an end, and by the time our next booklet Naughty Ladies was published in ‘42, almost all of the theaters in New York had been shut down or driven out of business.

In May of 1937 there were 14 remaining burlesque houses. Christers locked arm and arm with Papists and Jews brought righteous condemnation on the heads of the owners and performers, a united front of prudery would back up the state’s own resolve to dissolve the joints once and for all. As all followers and leaders of the desert religions, they loathed the flesh, and anything that celebrated life.

The District Attorney considered the burlesque houses to be “largely responsible for the sex degeneracy and sex crimes of the city.”

By the fall of ‘37 all but one Brooklyn house had closed, by the next year there were only three houses in all of New York. By 1942, all licenses for burlesque houses were refused.

Biographical sketches of hellbrand hunnies and historical harlots. From Mae West to Sarah Bernhardt. “Many untold secrets of the world’s greatest lovers!!!” proclaims the cover. 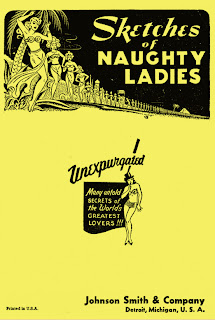 There have always been “naughty ladies”, though it is the men who often have behaved the worst, and appropriately garnered the most scorn from the popular media. Exceptions to the rule there are, and indeed it wasn’t Madonna who thought up the idea of being openly sexual in song and dance. It wasn’t Hillary Clinton who discovered that being married to a powerful man would allow a girl to wield her own power.

A number of the ladies mentioned in this booklet were wholly unknown to me when I first obtained it. You’ll probably be familiar with a few others. From Sarah “the most famous actress in the history of the world” Bernhardt to Mae “come up and see me some time” West, these ladies have made a lasting impression.

Though I will not vouch for the accuracy of the stories told about the famous and anonymous ladies contained in the following works, I’m sure they are no less true than modern celebrity journalism. I present these jems from the past for your entertainment, preserving ideas and celebrating lives of those who have passed on from life, and are almost all lost to memory.

An annotated and illustrated bibliography from Anton Szandor LaVey's "The Compleat Witch, or, What to Do When Virtue Fails".