“Now, there is no coy euphemism or sanctimony as you probably would expect… With chapters titled “Looks Mean Everything”, “Bitchcraft” and subsections named “You Don’t Have To Be Ugly”, “How and When To Lie” and “Learn To Be Stupid”. It’s going to strike the average reader and especially the sanctimonious type as sexist, discriminatory, prurient and morally bankrupt of a book. It is. But in the words of Spinal Tap “What’s so bad about being sexy?” You don’t read a book called The Satanic Witch cause you want equality. You read it because you want to have control. Even if you’re pretending to be equal.”

–Kevin I. Slaughter on The Satanic Witch,from his lecture Satanism as Weltanchsauung

On this page we will create a background on the book “The Compleat Witch, or , What to Do When Virtue Fails” by Anton Szandor LaVey, now printed under the title “The Satanic Witch” and published by Feral House.

I’ve referred to the book as LaVey’s magnum opus, and I think it deserves the title, if for no other reason than it’s the single book of original material he’d published that was focused on one subject cover to cover. The Satanic Bible, The Devil’s Notebook, Satan Speaks all sort of compile essays and sections on different topics. The Satanic Rituals may be considered a book on a single topic, and there is some good writing in it, but it’s essentially a ritual book.

A promotional flyer sent out to members of the
Church of Satan reads as follows: 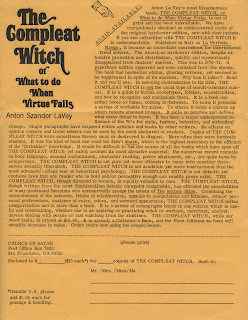 Anton La Vey’s most blasphemous book, THE COMPLEAT WITCH, or What to do When Virtue Fails, is out of print and has been unavailable. We have miraculously obtained an undiscovered cache of the original hardcover edition, new with dust jackets. If you are unfamiliar with THE COMPLEAT WITCH it is understandable. Published in Italy as La Perfetta Strega , it became an immediate sourcebook for international trend setters. The American hardcover edition, despite extensive promotion and distribution, quickly and mysteriously disappeared from dealers’ shelves. This was in 1970-71. A paperback edition appeared and soon vanished from the stands. The book had bestseller status, glowing reviews, yet seemed to be suppressed in spite of its success. Why was it taboo? Read it and you’ll see. In seeming contradiction to its title, THE COMPLEAT WITCH is not the usual type of occult-oriented manual. It is a guide to human archetypes, foibles, eccentricities, and how to recognize and manipulate them. It is a book one either loves or hates, nothing in-between. To some it presents a series of workable formulas. To others it holds a mirror up which reflects shunned images. It pulls no punches and defines what many dread to know. It has been a major underground influence of the 70’s for style, fashion, behavior, and attitudinal change. Single paragraphs have inspired entire articles and books by other writers. Its effects on opinion makers and trend setters can be seen by the most sheltered of readers. Copies of THE COMPLEAT WITCH were sometimes thrown away or destroyed in disgust. More often they were furtively stashed. It was the kind of book one read but didn’t share, which is the highest testimony to the efficacy of its “forbidden” knowledge. It would be difficult to list the names of all the books which have spun off THE COMPLEAT WITCH yet safely avoided its most abrasive material; the numerous recent manuals on body language, sensual enchantment, character reading, power attainment, etc., are quite tame by comparison. THE COMPLEAT WITCH is not porn yet more offensive to many (who consider themselves sexually liberated). THE COMPLEAT WITCH is not academic yet more instructional than the most advanced college test on behavioral psychology. THE COMPLEAT WITCH is not didactic yet contains laws that any reader who is bold and/or perceptive enough can readily prove valid. THE COMPLEAT WITCH, though directed to women, is equally valuable to men. THE COMPLEAT WITCH, though written from the most Machiavellian Satanic viewpoint imaginable, has offended the sensibilities of many professed Satanists who unreservedly accept the tenets of The Satanic Bible. Combining the awesomeness of the unknown, tricks of misdirection, appeals to compulsions and fetishes, others’ personal preferences, analyses of voice, odors, and outward appearance, THE COMPLEAT WITCH defies categorization and is more than a book. It is a series of monographs bound in one volume which is useful and entertaining, whether one is an aspiring or practicing witch or warlock, merchant, analyst; anyone dealing with people or just watching from the sidelines. THE COMPLEAT WITCH , while our stock lasts, is priced at $15.00. It is already a Collector’s Item, and the First Editions we have will steadily increase in value.

An annotated and illustrated bibliography from Anton Szandor LaVey's "The Compleat Witch, or, What to Do When Virtue Fails".